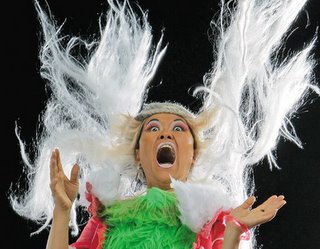 "I met a person I can stay with and start a relationship with, but also just the arts scene here for me is very liberating," Umiumare explains. "To see everyone in an audience respond to a performance so individually was quite refreshing for me, because in Japan the feedback you get is quite generic."

Yumi’s dazzling performances, which fuse elements of traditional butoh with cabaret, are equally individual and have gained rave revues at festivals in Melbourne, Adelaide, Edinburgh, Copenhagen and Hong Kong. Her latest production, DasSHOKU Hora!! opens at the Malthouse Theatre next month.

"People who have only seen traditional butoh might think of it as one person walking very slow for 90 minutes from one side to the other of the stage, but some people are very cynical," Umiumare laughs, when asked how she would describe the essence of her artform to an audience who were not familiar with it.

Butoh evolved in post-war Japan in the late 1950’s. "Its name comes from shortening the phrase ‘Ankoku Butoh’. Ankoku means literally ‘dark’ and butoh means ‘dance’, so ‘Dance of Darkness was the beginning of the form," she explains. "Some people think it as a reaction to the Americanisation of Japan, and so we try and get our own identity as a Japanese body, we put the white face on, shave the hair off and run around naked and tried to be radical."

Traditional elements of butoh include slow movement, white-painted bodies, shaved heads and contorted postures, while the dance itself evokes images of decay, fear and desperation, eroticism and ecstasy. It is an introspective artform, deeply connected with internal states of mind.

"We all have internal landscapes and in butoh we try and explain that internal world through very minimal movement," Umiumare says. "But for me the butoh is much more than that."

Uniumara’s work couples butoh’s intense physicality with cabaret, another medium associated with dark emotions, to create performances that are intense, satirical and powerfully entertaining. This fusion of styles has clearly been embraced by local and international audiences, with earlier incarnations of her DasSHOKU productions winning Green Room and Fringe awards and touring internationally.

In DasSHOKU Hora!! Uniumare will draw upon her position as an artist who embraces Western culture while working in an Eastern tradition to provide audiences with a fresh perspective on both Japanese and Australian societies.

"I feel very responsible to show that people can do this, they can live in two cultures," she says. "If I go back to Japan I want to show the influence from my Western culture, and especially because Japan is such a monocultural place; they did not understand what is cross-cultural. Officially it is very diverse, superficially very international but underneath it’s not that strongly international at all, so yeah, I was thinking that this work kind of makes me very motivated to give my desire to express!"